The U.S. Marshals Service announced Thursday that a 60-day anti-gang crime operation resulted in the arrest of 262 suspects and the recovery of five missing children in Oklahoma City.

We’re having an election over rioting, violence—and law and order. On August 25, CNN’s Don Lemon said of the riot issue, “It is the only thing right now that is sticking.”

Jussie Smollett’s sister, actress Jurnee Smollett, says that she believes her brother, the former who Empire actor who has fallen under scrutiny and legal trouble for his alleged hate crime hoax.

Stephen Miller, a senior adviser to President Donald Trump, told Breitbart News exclusively on Tuesday night that “cancel culture” is fueling the American left’s policies that are causing a spike in violent crime across the United States.

Actor Michael Rapaport has used Twitter to repeatedly slam President Donald Trump with profanity-laced tirades and insults. But on Monday, the Hollywood star aimed his unique brand of anger at his own team, singling out Rep. Alexandra Ocasio-Cortez (D-NY) for her decision to blame the recent spike in gun violence in New York on people merely needing “to shoplift some bread.”

On this week’s broadcast of “Fox News Sunday,” Black Lives Matter chairman Hawk Newsome called for defunding the police so that crime can be treated like a health crisis.

White liberals in a Minneapolis, Minnesota neighborhood say they are willing to risk a crime wave to avoid ever calling police officers to the scenes of suspicious or illicit activities.

On Thursday’s broadcast of MSNBC’s “All In,” Biden Senior Adviser Symone Sanders discussed Biden’s crime record by stating that she doesn’t like trying to relitigate things from the early 90s, the context of rampant crime and demands for reform at 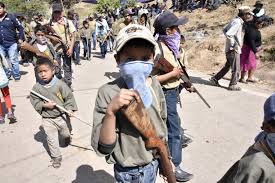 In lawless stretch of Mexico, child soldiers as young as 6 drafted to fight crime...

The number of knife crime-related incidents in England and Wales has reached a record high, rising by seven per cent over the previous year recorded.

The House Judiciary Committee report released Saturday on the legal and constitutional framework for impeaching President Donald Trump includes a discussion of the ultimate crime listed in the Constitution: treason.